"They're lightly armored, they move in small groups, and looks like they are today's welcoming committee. Here come the Slim bots!" ~ Mickey Cantor

Spawned in the early rounds in Blitz and in the most numbers in Crossfire, Slims are the weakest bots in the game in terms of health and damage. If a Pro is killed by a slim the announcer will make a quip about the embarrassment of it.

The Slim bots are the basic "Cannon Fodder" type bots and possess no special traits, aside from being the weakest bots in all of Monday Night Combat in terms of damage.

Slim bots are the initial lanning bots which spawn at the beginning of each round with the number of slims spawning decreasing as the round goes on.

In Monday Night Combat they will appear alongside Black Jacks and march on their way to the enemies Money Ball, only stopping to engage enemy bots. They will fire upon enemy pros only if there are no other bots in the area and the pro in question is to the front of them.

In Super Monday Night Combat, Slims take up the same role as in the previous game and will appear alongside Shady Bots. 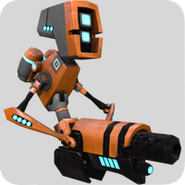 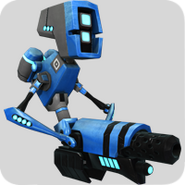 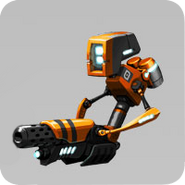