"These robots are going to suck the skill right out of you if you let 'em get too close! Scramblers are incoming!" ~ Mickey Cantor

Scramblers are short-range, mid-speed bots with moderate armor. They attack using a quick melee slash. The bot has an aura which "drains" nearby Pros' skills by "unwinding" the skill's charge meter. It also drains the Grapple for each class. The aura's range is roughly the same as an undeployed Tank's Jet Gun. If left unchecked, Scramblers can be a serious threat. They can be spawned two or three at a time (in the Xbox and Steam versions, respectively) by the Sniper in Crossfire matches for $100. Spawning Scramblers into a pack of Black Jacks can prove an effective strategy as they can drain skills so enemy Pros have fewer options to fight back with. If you end up fighting a Scrambler, try and keep a distance so you can regenerate skills, or if you can't use your secondary weapons grapple. 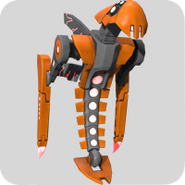 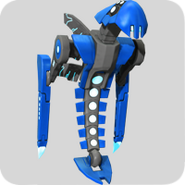 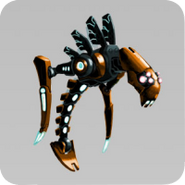 A Scrambler is a bot that can be bought in pairs along with a FujiBot from your spawn for $500. Scramblers head straight for enemy Pros, and when they are close enough, deactivate their skills and attack.

Due to their weak armor Scramblers are quickly dealt with, so you should not rely on them to kill an enemy on their own. They are rather meant to be a support unit for your attack against the enemy, as they will lock down the enemy escape and counter abilities so that you can finish them off easily.