Return to the characters page.

Leo (Voiced by Brandon Felker) is a defender Pro who focuses on bots and turrets with his specials, and pros with his Mona Laser and Balestra.

Cloned from DNA extracted from a fingerprint found on a sketch of a badger-powered military tank (to save on war elephants) the artist/inventor, whose full name is Leonardo di ser Piero da Vinci, was originally brought back to life by the Hyphus Group, a secretive group of wealthy industrialists, media moguls, and world leaders intent on bettering society. It was widely hoped-for that Leonardo's genius would restore much of the momentum lost within the arts and sciences over the last millennia, especially in the areas of food production, medicine, aeronautics, and bocce ball. It was to their chagrin then, when the foremost genius of the Renaissance period showed little interest in tackling the world's problems and instead languished for days at a time in front of the television, ordering products from infomercials and becoming mesmerized by its greatest spectacle: Monday Night Combat.

When da Vinci did break from TV's spell, it was not to pick up his studies on human anatomy or engineering. Leonardo sketched for days on end without food or rest, designing armor, weapons, and tactics designed to thrust him into the spotlight as Monday Night Combat's newest all-star. Yet science's loss is entertainment's gain, as Leonardo da Vinci once again baffles and astounds us with his genius and style every Monday night, on the greatest stage the world has to offer.

Leo's main weapon, a medium ranged hit-scan laser, with a clipsize of 10 and medium rate of fire.

Hits against a valid enemy target or neutral bot releases a fan-shaped area of effect damage behind its point of impact. Both the main laser and the AoE have falloff based on the range to the target.

Dealing damage with the main gun charges the alternate fire, which can be set off to heal Leo's entire team, including himself. The rate at which it charges is based on your range, whether or not the shot crits, and how many targets you hit with the AoE component.

Your current charge is indicated by the outer circle around your targeting reticule. At full charge, this circle vanishes and Leo gains a swirling rainbow aura around the Mona Laser on his wrist.

This can be set off at any time for scaling but minimal effect. Fully charged however, the heal gains a signifcant bonus amount. As a general rule of thumb, you should always fully charge the heal before using it for best effect - but if you need to pop it straight away to save yourself, do so.

A semi-rapidfire crossbow which fires three projectiles that spread out in a V shape as they fly. The Balestra has a clip size of 5 and a reasonably fast reload.

The projectiles have no damage falloff and will always do maximum damage at any range. Because of spread, its potential damage reduces to a third for long range shots as only the middle projectile flies in a straight line from the Balestra. This can however be exploited for long range sniping, or trick-shots involving multiple targets, so it's not necessarily a bad thing.

Accuracy Endorsements can reduce this projectile spread, making them an interesting choice for Leo, although not a priority.

Like all secondary weapons, the alternate fire is a standard grapple with a relatively lengthy animation, making it somewhat risky to use on your own. It can however provide time for an ally to arrive to support you and is very useful during team fights to keep a target from escaping. It also allows your turret to get a few more shots off into the enemy to help you.

You can immediately fire the Balestra after grappling an enemy, guaranteeing a direct hit with all three projectiles - very painful for your victim.

Leveling the skill decreases the cooldown and the fire-rate interval (at level 1 it cuts the interval down to 60% of it's base, then down to 50% at 2, and so and so forth as you level the skill).

Adoration of the AI[]

Leo throws out a Drillcopter that floats in the air until it detects a bot it can hijack. Hijacked bots are instantly restored to full health, and pursue players of the enemy team. The bomb can be detonated at any time once attached, instantly destroying the bot and causing a powerful explosion.

Leveling the skill increases its damage, reduces its cooldown, and allows additional types of bots to be controlled.

The bomb can only hijack naturally spawned bots, from either the lane or the jungle. It can never hijack a Jackbot or any player-spawned bots. The skill will not start its cooldown until the bomb has detonated, preventing the player from controlling more than one bot at a time.

Venice Defense appears as a rustical renaissance machine with exposed gears and a blocky shape. Similar to the Firebase employed by Supports, the Venice Defense takes a short moment to be set up and can be called back in order to deploy it somewhere else.

While the Firebase focuses more on raw firepower for area denial and only offers a weak heal buff to its team on level 4, the Venice Defense prioritizes utility for its team over its own firepower.

It restores armor to nearby pros in the same way as a deployed Gunner and allows members of the team to teleport back to spawn after a short phase of immobility if they press the "Use" key next to it. The turret's weapon is a long-range missile which does not pose a real threat to enemies due to its low travel speed, damage and fire rate. However, the turret can still cause a lot of harassing on enemies by being able to automatically shoot base turrets in it6s line of sight from far away or by constantly interrupting the enemy's health regeneration.

Because Leo lacks the heal beam of other Defenders, the Venice Defense slowly replenishes its own health over time to prevent wearing down just by a constant stream of enemy bots.

This page covers all unique weapons, taunts and gear for this pro.

As a general rule of thumb, Leo favors movement speed (increases his overall agility, both on the ground and in the air - and thus his survivability) and skill recharge.

Fire rate and accuracy are both attractive options as well. Accuracy makes it easier to land hits with the Mona Laser and decreases the spread on the Balestra, increasing its effective range. Fire rate lets you shoot that much more often, which leads to higher damage output overall and the ability to charge the Mona Laser's alt-fire more quickly.

However accuracy comes with a fire rate penalty, reducing the rate that you can charge heals, and fire rate reduces your accuracy, decreasing your effective range. Generally, these are stats you want to get as secondary bonuses off Ultra or Bacon level endorsements.

A cheap beginner's build that boosts skill Recharge and speed, with mostly ignorable penalties thanks to the Mona Laser's alt fire and Bot Code X.

A middle of the line build. The penalties are barely increased over the previous build, but now you gain a pile of accuracy. Particularly useful for the Balestra.

An "advanced" (and expensive) build. The penalties on this are harsh - It's definitely recommend that you only go with the passive-first build order if using this to counteract that fact. You definitely gain a host of benefits, it's just a question of whether they're worth the penalties to you. 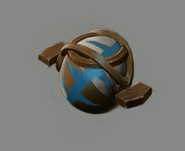 The Talon
Community content is available under CC-BY-SA unless otherwise noted.
Advertisement