"Well, I guess there's no more room for an aging mascot in the world of Monday Night Combat, so...let me introduce...the Juice Bot!" ~ Bullseye

The Juice Bot is a crossover character from Penny Arcade that was introduced to Monday Night Combat with the final release of the Steam version of the game. It will sometimes appear in place of MNC mascot Bullseye, who will announce its entrance throughout the arena instead. This and its distinctive theme music always indicate its presence in the arena.

The Juice Bot will behave much like Bullseye, wandering around the combat arena for about 30 seconds and allowing itself to be groped. If you try to grope Juice Bot it will belly bump you just like Bullseye. Shooting the Juice Bot earns money and will make it drop coins, Speed Ups, Churros, and even Bacon on very rare occasions. Meleeing It will earn Juice even faster. But, true to its name, the Juice Bot is best known for regularly dropping cummies that act as Juice pickups. He juggles cummies as he walks around, until he finally takes out a very large cummie, slams it on the ground and disappears in a shower of cummie juice that splatters all over the surrounding area.

Players can follow the same strategy they would when encountering Bullseye, though the same dangers (such as gathering near an Ejector) still exist. 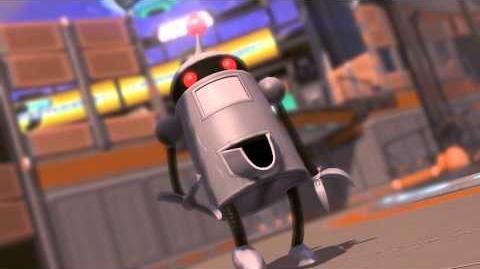 In Penny Arcade, Juice Bot is known by the name Fruit F#@$er, which is not suitable for younger audiences (thus its clean MNC identity). The original name referred to the fact that (at least in its original incarnation) it had a rather crude method to its work. There are several oblique references to this when Mickey announces Juice Bot's presence on the field. One is when he mentions, "If any of you in the front row happen to be enjoying a melon at the moment, I'd put that away! You don't want to see what he does to those. (shivers)" Another occurs when he calls out, "Hey, it's time to shoot the Fruit...I mean, the Juice Bot!" A third is when Bullseye says, "Okay, I know what you're thinking! You're thinking, 'I've seen that robot somewhere before.' Well, you're absolutely right! It's the..." only to be cut off with someone else finishing, "...Juice Bot."