"Oh it's the Jackbot! *chortle* I thought those were banned from training exercises. Boy oh boy, the Assault's really in trouble now!" ~ Mickey Cantor

The Jackbot XL (more commonly known as the "Jackbot") is the largest and most powerful bot seen in Monday Night Combat. Jackbots appear in both Blitz and Crossfire game modes.

Jackbots represent a significant change from the bots typically encountered by players, almost all of which can be destroyed by any character class with little risk to the player. With tremendous health, good damage output, and a surprising "ground slam" ability, Jackbots are a large threat to unorganized teams. Many Crossfire strategies and tips deal specifically with neutralizing an opponent's Jackbot or maximizing the effectiveness of your own.

A single Jackbot will spawn at each team's base at five-minute intervals during a Crossfire match; Bullseye's appearance in the arena always means Jackbots are due up. They also spawn on a continual basis in Overtime. Jackbots will follow the same path toward the enemy's base that breach bots follow, and will stop to engage any enemy bot, player, or turret they encounter along the way. Opposing Jackbots will never spawn on opposite ends of the same path (except in Overtime, when they'll come from all Spawns at once, or in Spunky Cola Arena or Uncle Tully's Funland, where there is only one Bot Lane) but may stop to fire at an enemy Jackbot if it comes into range. Like all bots, Jackbots will spawn with less than full health if their team's Money Ball shield is down (this includes during Overtime).

Jackbots can kill unaware players quickly and easily, but most alert players can dodge its rockets and ground slam with practice. Actually stopping the Jackbot before it destroys a base takes teamwork. It is important to bring down a Jackbot before it reaches the Money Ball, as the ball's shields will go down in seconds once the Jackbot is in range and targets the ball, and the combination of Jackbot missiles, ground slams, and the swarming of enemy Pros will make defense a nightmare. Even before it reaches the Money Ball, the havoc it can wreak on defending Turrets encourages teams to get rid of the Jackbot before they come under fire.

If you take out a Jackbot by yourself, you earn $75. A team job on the Jackbot earns each participant $65 for the Assist, meaning it is a good idea to attack the Jackbot, even if you do little to no damage (A 1 damage hit from an assault rifle from across the map will ensure the bonus). The Jackbot also drops a large amount of coins, Juice containers, temporary speed upgrades, and even (rarely) Bacon when it is destroyed.

Just as important as defeating the opponent's Jackbots is supporting your own. Since the Assassin is arguably most crucial in bringing down a Jackbot, defeating enemy Assassins before they can grapple is of prime concern to anyone supporting a Jackbot. Bombs, Air Strikes, Traps, Explosive Shots, and Flak can make the area around a Jackbot a dangerous place for an Assassin. Players with high armor can stay near the Jackbot's back to intercept an Assassin's grapple, saving the Jackbot tremendous damage. 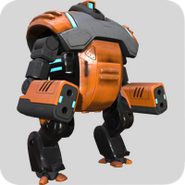 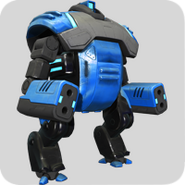 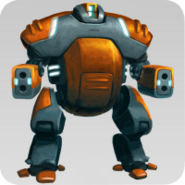 A powerful and deadly bot that spawns when one team's Moneyball goes down, when 25 minutes of Super Crossfire gameplay (16 minutes in Turbocross) has passed, or when bought from team-specific spawners in each base for 4000$. Each time the Moneyball shield of a team goes down, the opposing team automatically spawns two Jackbots. Jackbots have two moves in their arsenal, their arm cannons that fire against enemies, and stomping the ground which sends Pros flying and applies a slowing effect for a few seconds.

Pros are able to use any grapple ability they may have to temporarily immobilise and damage the Jackbot, preventing it from advancing and doing any damage. Abilities with slowing or stunning effects will stop it as well for a moment. Often teams take it in turns to grapple the jackbot (as grapple attacks often have a cooldown) while the rest of the team uses any available means to bring it down. Headshots do deal extra damage to the Jackbot, and therefore Sharpshooters are advised to aim for its noggin.

Quite often a team can "clutch" a victory after the 25 minutes of regular play has expired, if they can escort their Jackbot XL to the teams money ball quicker and safer than their opponents. In such an "overtime" situation will Jackbots only spawn in one lane for each team, so Jackbots don't interfere with each other unless more are spawned by the players in the opposing lane. Inversely, it may also be bought early on in the game if one team is exceptionally strong, usually resulting in a quick victory. Keep in mind that while grappling the Jackbot XL you are vulnerable to enemy fire, which makes taming this giant an even riskier prospect.

If both teams are equally strong, an annihilator attack is often what decides a match in combination with taking the enemy team out long enough to escort your own Jackbots to the money ball. Spawning additional Bouncers to distract the enemy from your Jackbots or increasing the pressure on a lane by buying an additional Jackbot to the one who already spawned are also good tactics.