"You might hear them but chances are you won't see them until it's too late! Gremlins take the field!" ~ Mickey Cantor

Spawned in Blitz and by the Assassin pro in Crossfire matches, Gremlins are small bots with little health. To make up for their defense shortcomings Gremlins spawn with a Stealth Cloak that makes them very difficult to see; this Cloak remains in place until they make an attack, after which they remain visible. Gremlins avoid enemy bots in favor of attacking enemy pros near their Money Ball.

Gremlins appear in all game modes. In Blitz, they are spawned by the Bot Spawner in predetermined rounds and patterns. In Crossfire, they can be spawned in packs of four by the Assassin at a cost of $100.

As Eliminator Bots, Gremlins are programmed primarily to pursue and engage enemy Pros. Once they come into range of their target, they will slash with their sharp arm blades. They will continue to engage the target until the target is killed or otherwise rendered inaccessible (such as by the Pro engaging a Jump Pad or crossing the treshold of their base), at which point, they seek out a new target. Should no Pro be available as a target, Gremlins will next seek out enemy Turrets. Only when no other possible target is available will a Gremlin seek out the enemy's Money Ball.

When a Gremlin first emerges from the Bot Spawner, it will already have a stealth cloak engaged that makes it difficult to see. Enemy turrets cannot target a cloaked Gremlin; however, the Heal/Hurt Gun of an enemy Support can target one; furthermore, the indiscriminate nature of ShaveIce turrets means Gremlins will be affected by them even when cloaked, making them easier to spot. It is also possible to detect a Gremlin from the sounds it makes and from the subtle visual distortions it makes when it is moving around. The cloak only remains in effect until the Gremlin makes an attack, at which point it remains visible until it is destroyed. 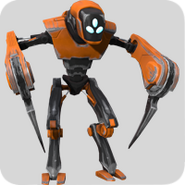 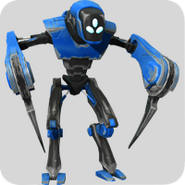 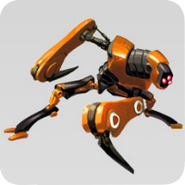