Bots are game-controlled non-player characters (NPCs). They automatically fight their way across the map to attack the other team and their Moneyball, or in Blitz mode, the only Moneyball. In Crossfire only bots can destroy the shielding protecting the other team's ball. 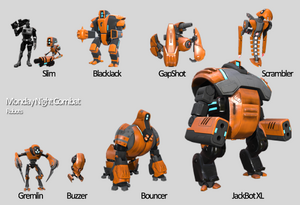 There are two categories of robots and eight total robots.

Breach Bots follow a visible, set path from their spawner to the enemy Moneyball. They will fire at enemy Pros or turrets along the way, but will only stop to engage other Breach Bots that are blocking their path. When they reach the Moneyball, they jump onto it (or fire at it in the case of the Jackbot) and breach the shields, causing it to fall, exposed to most attacks.

Robots can be spawned by players at their own spawners for a cost. The type of robots spawned depends on what class spawns them.

During a Crossfire match, the Bot Spawns on each lane have a node with the outline of a Black Jack on it. If a Pro walks up to it, the node will reveal itself to be a Spawn Robot switch, asking for $100 and a 30-second cooldown in exchange for the generation of one or more Eliminator Bots. Each Pro can spawn a single type of robot.

The Sniper could originally only spawn one Scrambler at a time. Recent updates have raised that number to two and now three.

Any Pro Kills made by these Bots will be credited to the Pro who spawned them. Kills made by Black Jacks, Slims, and (in Spunky Cola Arena) automatically-spawned Bouncers will go uncredited.