"Well I know I need to see a few of these at the casino tonight if I'm going to make my alimony payments on time. Here come the heavily armored and fist swingin' Black Jacks." ~ Mickey Cantor

Black Jacks are the most common breach bots.

They show up in a group of overwhelming pairs. Many of them show up at once, especially in Blitz.

Black Jacks appear in all game modes. In Blitz, they are spawned by Bot Spawner in predetermined patterns while in Crossfire, they spawn automatically out of all spawns at regular intervals, usually at the same time as a small group of Slims. They are programmed to follow the Bot Lane towards their target Money Ball. If an enemy target comes within range of its right-arm laser cannon, it begins to fire upon it on a regular basis.

If the target is a Bot in the same Bot Lane, the Black Jack is considered to be "blocked" and will come to a stop just outside of melee range and engage in a standoff with the opposing unit, continually firing its laser until either it or the opponent is destroyed. Only after defeating the blocker will the Black Jack continue advancing. If the target is a Pro or Turret, however, the Black Jack will not stop and will instead continue past it if it can. If a Pro comes within melee range, the Black Jack will begin to rotate its torso so as to bring the spiked fist of its left arm into play in an attempt to punch him or her.

Once it reaches the Money Ball, the Black Jack will jump up onto it and start bashing it with its fist. A single Black Jack is capable of inflicting two hits on the Money Ball before it explodes, which is sufficient for it to single-handedly break the shield, provided it can connect with both hits before being destroyed.

Black Jacks return in Super Monday Night Combat in various forms, but maintain their strengths. They can be spawned from bot spawners towards the middle of the arena and they will spawn in the Jungle as Neutral Hostile bots. 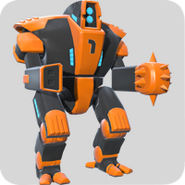 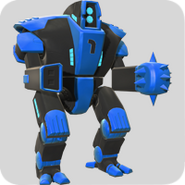 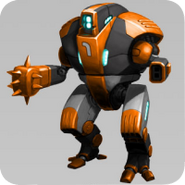