Return to the characters page.

Assassin may also refer to something else.

The Assassin is one of the three classes assigned to the Commando archetype, and thus a difficult Pro to play, having low health, but high mobility and high melee damage. Like her title would suggest, the Assassin is geared towards ambushing and finishing off weakened enemy Pros. The Assassin is difficult to play, but rewarding to master, as their actions can have a direct, tangible influence on the outcome of the match.

Deadly, quiet, invisible. The Assassin has become one of the most popular combatants on MNC due to her acrobatic and gymnastic kills and cool cloaking ability.

While unable (or unwilling) to speak (MNC scientists don’t know for sure) the Assassin carries out her duties with dignity and grace, killing quickly and seldom “showboating” like some of her teammates. Though a menacing and mysterious figure she appears at times protective of her teammates, but never at the expense of a win. Though she seems to have a thorough sense of justice make no mistake, she is not a woman to be crossed, even by a teammate. Most of her fellow athletes keep their distance when off the field, save for the occasional awkward approach by the Heavy Weapons Specialist or Tank.

In recent years there has been quite a bit of controversy surrounding the Assassin. Some scientists in MNC have reported an unusually high number of instances involving insubordination, with some Assassins even taking unauthorized leaves of absence from the team. Some have begun to worry that the Assassin clones are getting more difficult to control. Top management at MNC have downplayed the concerns, reasoning that her popularity with the fans is worth any such inconvenience.

When the Assassin dreams she dreams of a society that throws off its self-imposed shackles, unafraid to live as free men and women without the comfort and safety of a predictable existence. Silent by choice, she keeps mute so that her words will not betray her feelings towards the ruling overclass. Most of all she dreams of living as an Outlander, of raising children with a likeminded male warrior who'd rather die a free man than be consumerist slave.

Independent thinkers, substance over style, being feared, the roar of the crowd, the rush of the kill

The Assassin revolves around decimating her opponents using her two quick grapples and attacks in conjunction with her Cloak and/or Blind. Her melee, however, is her main source of damage, dealing explosive amounts of output if attacking enemies from behind.

The Assassin's Primary weapon is a curved 'kunai'-style dagger, with a braided pommel and a large ring at one end. It is one of few melee weapons to only swing once per attack, but deals slightly more damage per hit to compensate. When the Assassin's Offensive skill is upgraded to level 4, her Dagger becomes a Katana, changing her grapple animations and signifying her maximum offensive passive level.

The Assassin's secondary weapon is a wrist-mounted crossbow device that shoots bladed discs, or 'shuriken'. These shuriken are much slower than bullets, but ricochet off of map surfaces and do not have an arc, like grenades do.

The Assassin becomes undetectable to enemy bots and turrets for as long as this ability is in action. Cloak requires one-sixth of the total skill to be activated, but does not consume it upon activation. Each attack while cloaked drains a portion of the duration.

The Assassin throws down a smoke bomb, releasing a cloud of smoke and blinding flash, leaving Pros temporarily disoriented and disabling enemy bots and turrets for three seconds. Unlike in Classic MNC, this ability may be used instantaneously.

The Assassin's 'Sprint' skill has been replaced with Leap, which previously functioned as a by-product of Smoke Bomb. This skill allows the Assassin to jump very high instantaneously, allowing early Jungle access and escape options. When slowed, the speed of the jump is reduced by 75% of the slow's strength (thus a 50% slow would result in a 37.5% reduction in jump speed).

The Assasin have grapples both on her Shuriken Launcher and Dagger. They all have different animations when grappled from the front and back.

This page covers all unique weapons, taunts and gear for this pro. 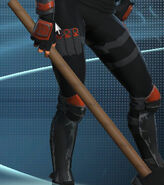